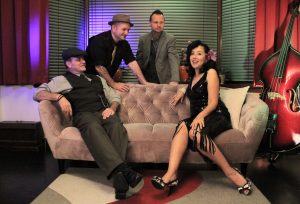 Dee’s Honeytones! It’s not about the clothes, the hair and the shoes, but it’s all about jumpin’ rhythm and blues.

Dee’s Honeytones is born from rhythm and blues, raised with rockabilly and grown into a jumpblues quartet. Influences are the black side of early fifties rhythm and blues and rockabilly artists oa. Etta James, Elmore James, T-Bone Walker en Wynonie Harris.

Singer Dee Ann sings with a lot of passion for this kind of music. With her clear voice she really hits this early fifties style. Besides her voice her swinging piano and Hammond make the sound of the band complete. Dee Ann writes a lot of the songs herself which she performs on stage like no one else can. In 2011 she received from Andy Tielman himself (the father of Indorock) the Andy Tielman award.

Double bass player Mars earned his Rockabilly credits already in other Rockabilly and Roots formations. His technical and steady walking bass with the full sound of his acoustic bass forms the basis of the Dee’s Honeytones sound. Emiel has blues flowing in his blood and bones and expresses this in his own unique way with other influences from rootsmusic. His unique solo’s and authentic sound makes him the perfect guitarist for this formation. Rene knows how to carry the whole band with his steady and rhythm and makes sure, swing, shuffle, boogie and jazzy songs groove like the drummers in the early days did.

Their first album “Hot Damn” was released in 2014 containing fifteen songs, two covers and thirteen originals written by Mars en Dee Ann van den Berg. Their repertoire is inspired on Jump blues from the 40’s and 50’s, rockabilly and swinging jive. Bluesmagazine writes in 2017 about their second album “Wow Wow”:  “We are proud to announce that the swinging heritage of the (Dutch band) Gigantjes is carried on by another Dutch band. ”.
Dee’s Honeytones stands for an original fifties swinging gig!